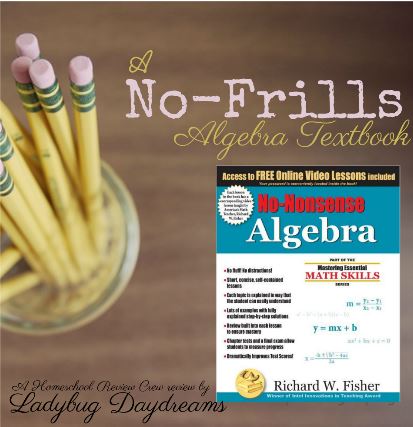 I recently reviewed a Pre-Algebra program with Seahawk, and he’s done really well with it. When the opportunity to review No-Nonsense Algebra from Math Essentials presented itself, I thought the early chapters would make a good supplement to his current pre-algebra course, and then when he finished that, we’d have the Algebra 1 program set aside ready to dive into.

No-Nonsense Algebra is a softcover math textbook, and as its title suggests, it is just Algebra. There are absolutely no frills, lessons are short and self-contained, and there are loads of examples and practice problems. And to make a good textbook even better, author Richard W. Fisher has created video instruction to go with every single lesson in the book. The access passcode is printed right in the book (on the first title page), so you don’t have to ever worry about losing it.

No-Nonsense Algebra covers all the topics you’d expect in an Algebra 1 course: 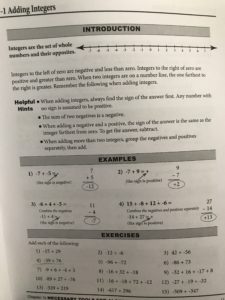 The very first lesson. Note that there’s nothing on the page except the actual information needed and practice problems. That’s what I mean by “no frills.” Click to enlarge.

As I mentioned before, Seahawk was the main beneficiary of this math book. He wasn’t thrilled with this (he really likes his online math program), but after the very first lesson he was a convert. He was having trouble wrapping his mind around adding and subtracting negative numbers, and Mr. Fisher’s video lesson explained it much more clearly than anything we’d come across previously. After that one video lesson, Seahawk was able to do all of the practice problems (15 of them) in record time. From then on, doing this book in conjunction with his regular math lesson has been just fine – which is a real testament to the effectiveness of this program, considering it’s summertime and my energetic 13-year-old would rather be spending time outside with his friends.

In addition to doing this with Seahawk, I decided to have Munchkin (almost 11, going into 6th grade) sit in on the first lesson, just to see how he did with it. While I won’t say that was a complete failure, it was definitely clear after just a few minutes that it was way beyond him. He got very frustrated, so I quickly let him off the hook and continued on with just Seahawk. However… we’ve had such great success with the older son that I’m seriously considering getting the Math Essentials Middle School book for him to use this school year.

One of my favorite things about this text is that it provides constant review for the student. I think this is absolutely vital in helping them to remember what they’ve learned. Without frequent review of the material, it’s too easy to “learn the test,” and that’s not what we want for our students. We want them to actually know what they’re learning so they have the skills they need to succeed long-term. And while not every algebraic concept is useful in the “real world” (I don’t even remember the last time I needed the quadratic equation was – probably when I was taking high school math classes!), many of them are. For this reason, I’m so glad to have the opportunity to use such a solid math book with my boys. And because this is a textbook as opposed to a workbook, I’ll have it on hand for all of them. I’m really glad about that!

There are 60 reviews on No-Nonsense Algebra from members of the Homeschool Review Crew this week. Make sure to click the banner below to find links to the rest of them.