Okay, so you’ll remember when I mentioned last week that I was obsessed with making stuffed animals, right? I meant it! Here are more of the creatures I’ve made this month. (Amigurumi, by the way, is the Japanese word for “knitted or crocheted toys.”) 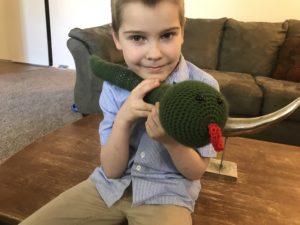 This is Victor the Viper, made for Grasshopper. I don’t know what it is about this kid, but he loves all things wicked and creepy! He always roots for the villains in the movies, and when I was making stuffed animals, he asked for a snake. 🙂 The pattern is from Crochet Cute Critters by Sarah Zimmerman, which Will bought for me from Amazon.

This is Oswald the Raccoon. I was initially going to give it to Dragonfly because he always has such huge circles under his eyes (I know he doesn’t sleep enough, but it’s hard to make him sleep in, and he lays awake for a long time every night before falling asleep). But then he asked for a giraffe instead. So Oswald here will go into my “stash of future gifts.” In fact, that will be the fate of most of the animals I’m making right now. Pattern is from Jess Huff. 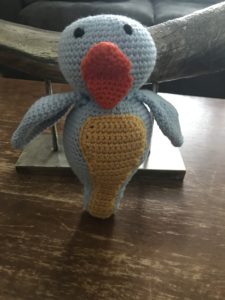 This is Giselle the Nightingale. She’s from the same book as Victor (though in the book she’s called Nina). Another animal for my stash. 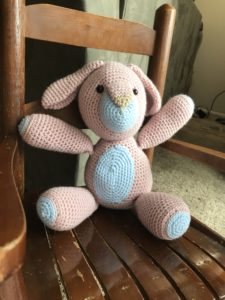 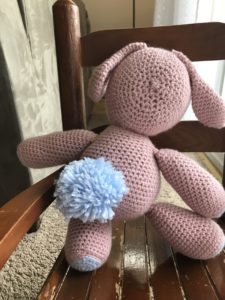 And finally, Bella the Bunny. I combined patterns from both Jess Huff and Crochet Cute Critters to make her. The main parts are all from Jess Huff, but I wanted floppier ears so I pulled those from CCC. Additionally, I loved the idea of a pompom tail that was in CCC, so I did that instead of crocheting a ball like Jess Huff suggested. She’s also going into my stash.

Fun fact about that rocking chair: it’s quite old. My father-in-law had it when he was a small child, then my husband used it, and now my kids have it. My father-in-law gave it to us when Ballet Boy was tiny, and now Bumblebee is using it. So he’s the 7th boy to love on it!