A fresh month means it’s time for a new reading list! Here’s what our family is reading in January. 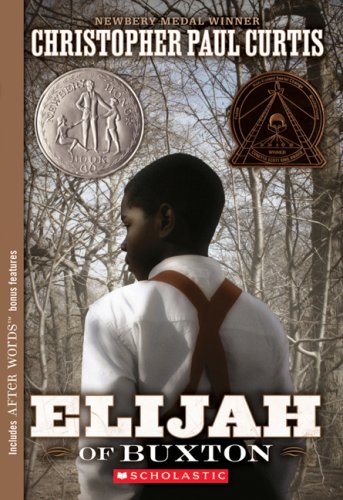 I forgot to get us to the library to pick up the book club book with enough time for the boys to read it, so we’re reading it aloud. It is Elijah of Buxton, the story of a black boy whose parents were slaves during the American Civil War. They escape to Canada with a large group of other slaves, where Elijah is the first child born free.

I don’t have anything firm on my to-read list this month. I’ll likely find a book in my Kindle account that I picked up for free and haven’t read yet and read that.

This choice might be a little controversial, but I stand by it. Seahawk is reading The Hunger Games. We watched the movies with the boys in December, including having Will take them to see Mockingjay Part 1 in the theater. (I did Christmas shopping with Small Fry while the rest of them were in the theater; Will and I had already seen the film a couple of weeks before.) They boys were so enamored with the films that they had zero interest in waiting a year until Mockingjay Part 2 comes out to find out what happens to Katniss, Peeta, and Gale. The books aren’t exactly like the movies, though, so if they were going to read the book to find out how the epic story ends, we wanted them to start at the beginning. So I found a set of all three books at Goodwill for $2.99 each and bought them all. These books were the boys’ “something to read” for Christmas. (We do gifts following the poem “Something they want, Something they need, Something to wear, and Something to read.”) Seahawk dove into the book pretty much immediately and can now rarely be seen without it. And you know what? For a kid who doesn’t like to read, this is huge. And even if the book is a bit gory, violent, and frightening, I’m going to let him read it. Because he’s reading. And that makes me happy.

Our library fines are a bit high right now (I blame the holidays – it was hard to get to the library on December 23rd when everything was due…), so we couldn’t pick up a book from there for Munchkin. Instead, we found Farmer Boy
by Laura Ingalls Wilder for him to read from our personal library. Last summer, we found the complete series in a full-color version for pretty inexpensively at a used book store in town and picked up them all. I started reading them after having fallen in love with Little House in the Big Woods during our Progeny Press review. Little House on the Prairie wasn’t as good as Big Woods  my opinion, so I haven’t read the others after that. I’m sure they’re great, but I really didn’t like Prairie that much, so I don’t really feel motivated to continue the series. But Munchkin. He’s really loving Farmer Boy so far. And that’s what matters :).

Small Fry is still all about the Franklin books. It’s barely worth mentioning again ;). We’ve found a few of Seahawk’s old Franklin books, plus we got Small Fry one of his very own for Christmas (something to read again), so he’s got a small library of his own building. He loves to hold his Franklin plush toy (“something they want” for Christmas – we like to make their “something they want” something that they’d love even though they don’t necessarily know they want it) while I read him the stories.

This post has been linked on Read-Aloud Wednesday, a linkup on As We Walk Along the Road.