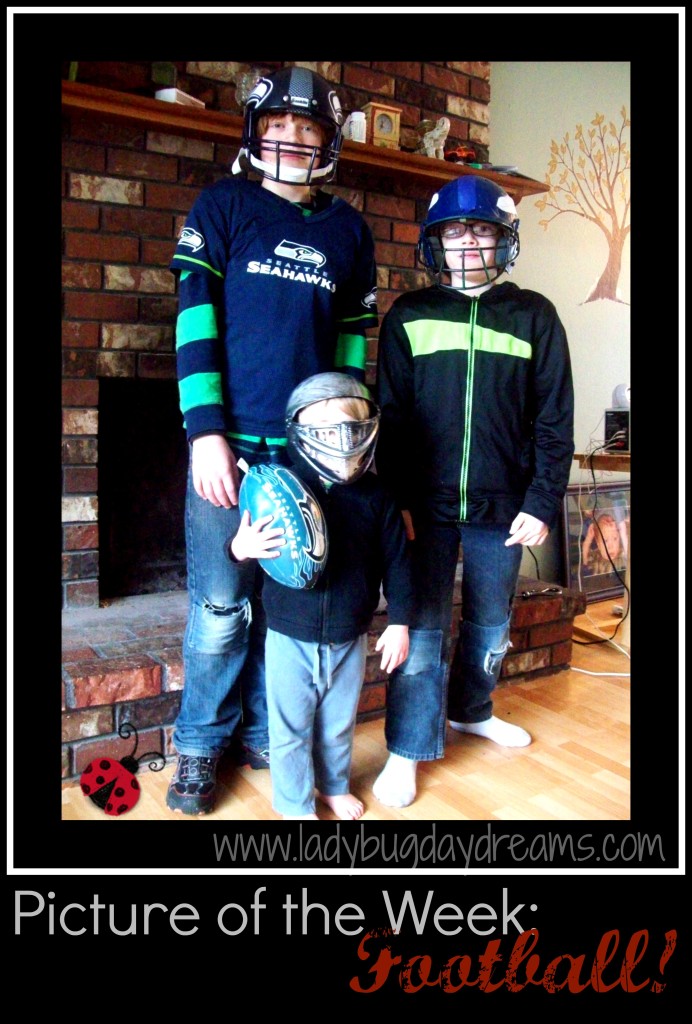 In honor of the Super Bowl this week, the kids decided to dress up in football “uniforms” and play outside for a little while. I have no doubt that Seahawk was the mastermind behind this, since he’s the biggest football fan in the family. He had some birthday money a few months ago, and he used it to buy the Seahawks jersey and helmet (which he then wore for Halloween). Munchkin’s helmet is technically a softball helmet that we bought from Goodwill for Halloween 2013 – Seahawk went as a football player that year, too. When he bought his official helmet, he passed the other one down. Munchkin is actually a Baltimore Ravens fan (no idea where that came from considering we don’t live near – or have ever traveled to – Baltimore), so to make the softball helmet “his,” he drew his interpretation of the Ravens logo on paper and taped it onto the helmet. (He’s currently saving his allowance for a Ravens version of the set Seahawk has.) Small Fry’s helmet is a knight helmet that my dad bought him from the Dollar Tree.

Helmets are only part of a football uniform, though, right? The other big part (when you don’t have a jersey, that is) is the padding. For this, Seahawk is pretty savvy. He just takes extra clothes and/or jackets and stuffs his and his brothers’ clothes to look like pads.

I think it’s definitely safe to say that “Football Player” is my children’s favorite dress up game!