Every year that I’ve been a part of the Homeschool Review Crew, we’ve been able to review a Progeny Press study guide. Because I’ve done reviews for this company before, I knew what I was getting into and that made it easier to choose titles for a review this year. There were several options available, for kids from early elementary all the way up through high school. I’m not super concerned about my younger set getting good literature in at this time; they listen to loads of audiobooks all the time. When they’re a little older, we’ll dive into studying the books more, but for now, they’re being exposed to lots of different stories, and that’s good enough for me. One thing that was different this year is that reviewers were allowed to choose TWO study guides instead of just one. So for this review, I chose the Animal Farm Study Guide for Ballet Boy and the Little Women Study Guide for Scorpion. 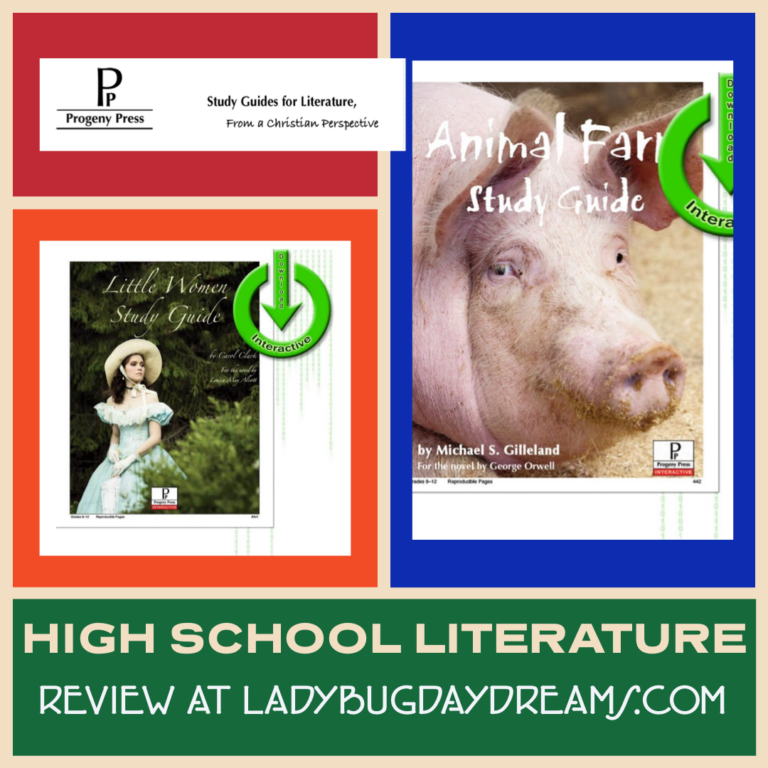 Progeny Press, which is owned by Michael and Rachel Gilleland, creates study guides for popular novels, both classic and modern, from a Christian perspective. Their goal is to help parents teach their children to read with a critical eye… to dig deeper into their reading assignments and find things they might not otherwise notice, especially seeing Biblical aspects in mainstream books.

They sell their study guides as printed workbooks, CDs that are mailed to you, or digital downloads, which are available instantly for up to one year after purchase. The digital versions are editable PDFs, which means you can have your student type their answers right into the file (but they’re also printable if you prefer that). 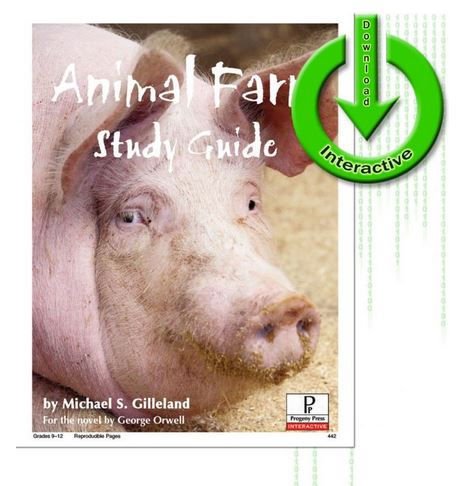 In case you’re unfamiliar, Animal Farm is listed as one of Time Magazine’s Top 100 Novels of All Time. Written by George Orwell and first published in August 1945, the allegory tells the story of a group of farm animals who rebel against their human farmer. Their goal is to create a society where all animals can be equal, free, and happy. The idea is contrived by Old Major, a boar, but he dies just three days after bringing the idea to the rest of the animals. This allows the other pigs to take the lead from him, and before long, the pigs have decided that Animal Farm (formerly Manor Farm) is no longer a democracy. Napoleon, the main pig, immediately begins acting like a human, including working out trade deals with other farmers. This was expressly forbidden at the founding of Animal Farm, but he always has some excuse for why he’s justified in doing so. As time goes on, all the pigs become more and more human-like, wearing clothes and walking upright, and generally oppressing the other animals. The original seven principles that Animal Farm was founded on get boiled down to just one: Every animal is equal, but some are more equal than others. Napoleon eventually changes the name of the farm back to Manor Farm, and the “common” animals, as they look in at the party of elites through the farmhouse window, can no longer tell the difference between the pigs and the humans.

Ballet Boy has never been a huge reader, so for this review, I had him listen to the audiobook, which we got from Overdrive (the online library app that works in conjunction with your regular library card). He was able to listen to the book while working on other things, which works really well for his learning type – he’s always been an audio learner. When he’d made reasonable progress in the book, I asked him if he’d rather work on the study guide digitally or if he wanted me to print him a copy. He asked for a printed copy, so I printed the pages for a few chapters at a time, front and back. He worked entirely independently, with just a few questions here and there for me.

When I asked him about his experience with this study guide, he expressed to me that he enjoyed the book and didn’t mind the study guide. I think it was a bit better than that simple assessment, though. One of the times we had a bit of a conversation, he told me that he’d done some independent research (without being “asked to” by the study guide) about the history of Russia and the major players at the time the novella was written. Having him take that kind of initiative is really good, and a very big step in creating lifelong learners, not just students. And that, after all, is the point of school – and a major goal of most homeschoolers. 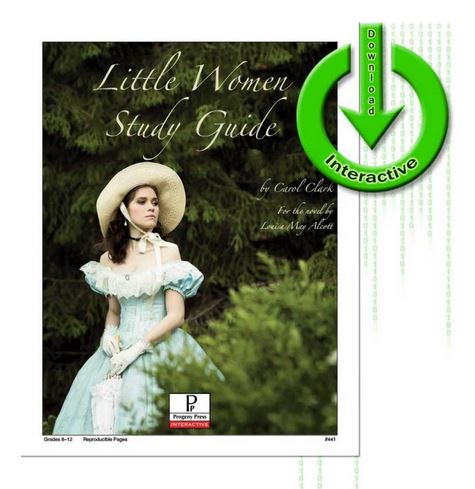 Scorpion was always a big reader when he was a little kid, but he’s found other interests lately. So for this review, I had him do a combination of audio book and Kindle book reading. Because Little Women is such a long novel, I had him do a few chapters of reading, then a section of the study guide. Progeny Press officially recommends that students read the entire book and then do the study guide, but with something as long as Little Women, that had the potential to be counterproductive. It wouldn’t be very helpful to be trying to work through parts of the study guide from the beginning of the book if you’d read a mammoth novel and couldn’t remember the details from the beginning by the time it was time to study. 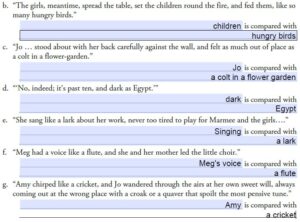 I gave Scorpion the same option for working through the study guide – on the computer or a printout – and he chose to work on the computer. Like his older brother, he also worked on his own with only a few questions for me here and there. The study guide includes lots of vocabulary lessons, comprehension questions, and deeper thinking exercises – everything I expect and love about Progeny Press. Scorpion has traditionally really enjoyed these study guides, too, but he didn’t love this one as much as those that he’s used in the past. I think that because he’s a boy, he wasn’t that into the story of Little Women. I will probably have him do the Animal Farm study guide later this summer, and I expect to have a better attitude with that one.

Make sure to visit the Homeschool Review Crew blog for more Progeny Press reviews. This year, options were A New Coat for Anna (grades K-3); In the Year of the Boar and Jackie Robinson (grades 4-6); My Side of the Mountain (grades 5-8); and of course, Animal Farm (grades 9-12) and Little Women (grades 8-12).