Critical thinking is a really important skill to have, and part of that is being able to recognize bad reasoning, or “straw man” arguments. The Fallacy Detective by Nathaniel Bluedorn and Hans Bluedorn aims to help students do just that. Over the past few weeks, my teenagers have been having good conversations together using the lessons in this book as a jumping off point. 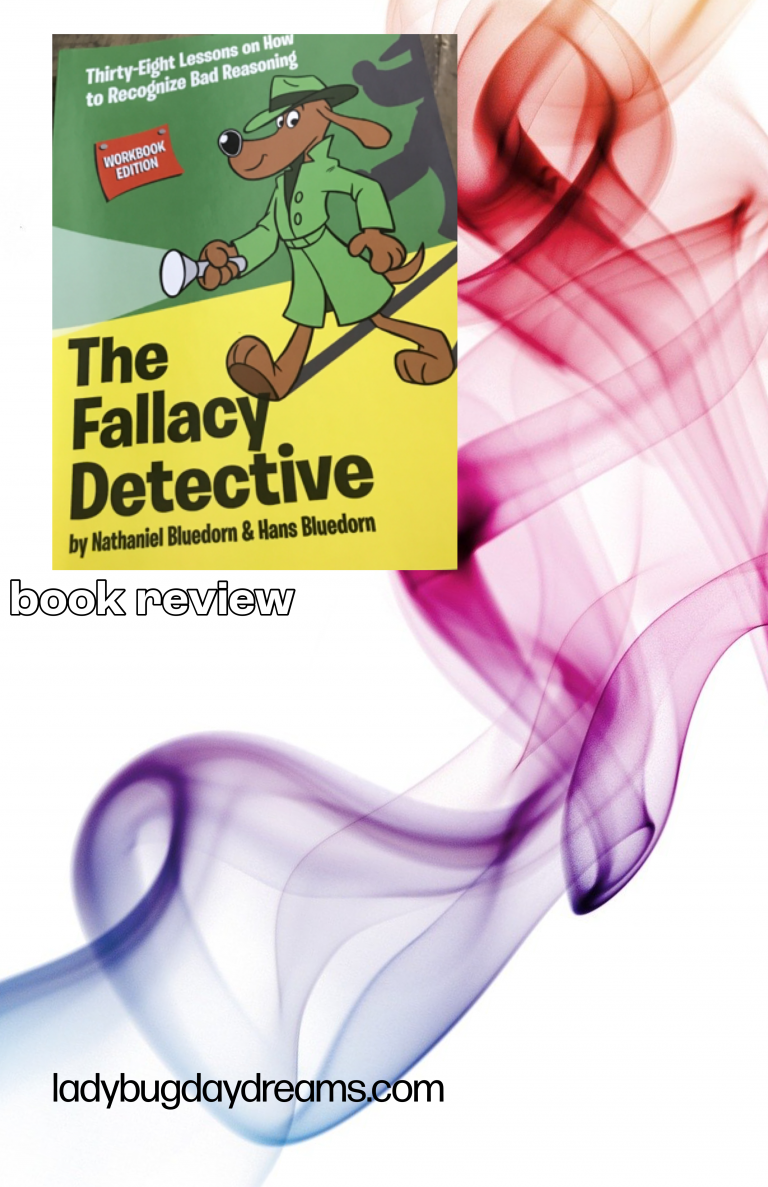 I remember being in high school, and my World History teacher was huge on making sure we understood fallacies. What is a fallacy? “A fallacy is an error in logic, specifically a place where someone has made a mistake in his thinking” (from the back of the book). The main one I remember from my former teacher is the ad hominem or “personal attack” fallacy. 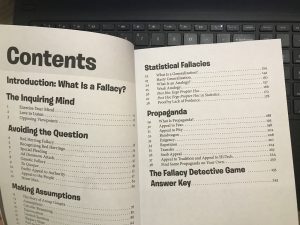 The book is divided up into five different parts, and each part has between three and ten lessons, for a total of 38 lessons. The first three lessons, in the “The Inquiring Mind” section, are designed to help your students understand why critical thinking is so important. (Hint: It’s so they can spot others’ faulty thinking more easily and be equipped to make their own informed decisions later on.) The rest of the sections each tackle a “big picture” issue, with the lessons showcasing the different fallacies that fall under that specific heading. Take my ad hominem from before, for example: that falls under the “avoiding the question” section because the whole point of that fallacy is attacking your opponent instead of focusing on the issues at hand. It’s easy to point fingers, but a whole lot harder to come up with a sound argument. 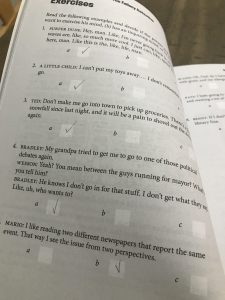 Each lesson has just a few pages of text (no more than 3-4), followed by some questions designed to help your student further understand the topic being taught. It’s sold as a workbook, so students are encouraged to write directly in the book. In the beginning, the questions are simple, multiple choice – just check the correct box. As you work through the book, they get a bit trickier, and kids need to pull specific examples of the fallacy being discussed from the sample. It definitely requires some fairly intense critical thinking skills! But through all that, there are also fun comics – both familiar (Peanuts, Dilbert, Calvin and Hobbes) and unfamiliar – to help illustrate (pardon the pun) the points being made. The comics not only serve to clarify the points in the lesson, but also break up the text a little bit, which is good for kids who get overwhelmed with too much reading.

So what did my kids think of it? 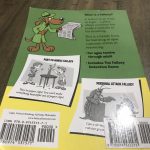 Ballet Boy: I really liked this book. I enjoy studying logic in general, and this book was no exception. It was nice to have something specific to discuss with my brother, too. I liked having something to do with him in the evenings while my parents were getting work done and the little kids were in bed. I would definitely recommend this book to anyone – teen or adult – who is interested in learning more about different types of fallacies and how to combat them.

Scorpion: This book was pretty easy to read, but I found the fallacies a little tricky to identify. The comics were fun to read, and even though the lessons were kind of hard (I haven’t had the same amount of logic training as my brother) I liked trying to figure them out.

Members of the Homeschool Review Crew are discussing both The Fallacy Detective and Archer and Zowie (also by Hans Bluedorn), so make sure to head over there to learn more.